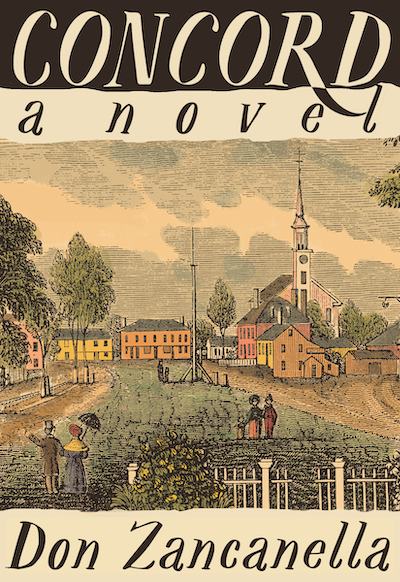 Summer has come to New England and Henry David Thoreau and his brother John are in love with the same girl. Reclusive writer Nathaniel Hawthorne is courting Sophia Peabody of the remarkable Peabody family of Boston. And the brilliant Margaret Fuller and equally brilliant but married Ralph Waldo Emerson find themselves engaged in a passionate affair of the mind and heart.

Eventually, everyone–Henry, Margaret, the Emersons, the newlywed Hawthornes, and even the Alcotts (who have a daughter named Louisa May)–come together to live in the village of Concord. There, they experience times of joy and times of sorrow as they begin their journey toward becoming the extraordinary group that history remembers and readers revere. Now they are icons of American literature but in Concord they were young and in love.

“Don Zancanella reimagines a year in the life of some of the most famed figures [in American literature]–Henry David Thoreau, Margaret Fuller, Sophia Peabody, Nathaniel Hawthorne, and Ralph Waldo Emerson — focusing on a moment before they’ve fully come into their own as writers and thinkers, in the heady time of way-finding, as their political, social, and literary personas and ideologies take root, and, especially, as they fall in love.”
—Boston Globe

A “delightful novel..that channels both the bold and hidden voices of history.”
—Caitlin Horrocks, author of The Vexations and Life Among the Terranauts

“Don Zancanella’s gloriously vivid novel is time-travel of the most evocative sort . . . . We struggle alongside Thoreau over the wording of a love letter, worry with Margaret Fuller about the seating arrangements at one of her Conversations, and watch out the window beside Sophia Peabody to see if her strange but intriguing neighbor, Nathaniel Hawthorne, might pass by. Beautifully rendered and wholly engrossing.”
—Thisbe Nissen, author of Our Lady of the Prairie and How Other People Make Love

“This enthralling novel depicts Thoreau and his contemporaries not as the cultural luminaries they became but as young adults whose futures were being shaped by their passions and choices, by their triumphs and losses. . . Zancanella’s portrait of 1840s New England reveals it to be both wonderfully ordinary and the most interesting place in the world.”
—Elise Blackwell, author of Hunger and The Lower Quarter

“Zancanella brings his characters — who happen to be among the foundational characters of American culture — to vivid and altogether human life.”
—Jon Clinch, author of Finn and Marley